If you received a DUI in California with an out of state license then there are certain important things you need to know about what happens next. 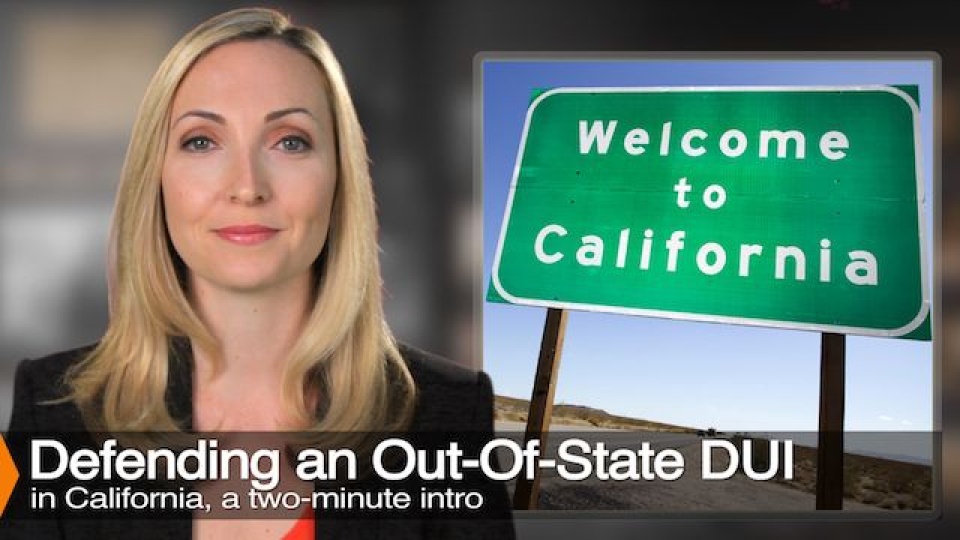 Overview Of DUI in California

California has some of the country’s strictest driving under the influence (DUI) laws and they are applied equally to both in state and out of state drivers.

In California, DUI crimes are charged under:

Because state law will apply, if you currently live in another state and have been arrested for a DUI in California, you will want an attorney to assist you through the proceedings1.

Can An Officer Confiscate My Out of State Drivers License?

Regardless of what state you live in, a California police officer does not have jurisdiction to confiscate your license if it was issued out of state.

Can I Lose My California Driving Privilege?

An officer cannot confiscate your license however, you will receive an order of suspension that notifies you that your California driving privileges will be suspended in 30 days.

However, SB1046 allows you to receive a restricted license in California if you meet all eligibility requirements and install an ignition interlock device.

How Long After Arrest Do I Have To Schedule A DMV Hearing?

After you receive the order of suspension, you have 10 days to schedule a hearing with the DMV if you wish to contest the suspension of your California driving privileges.

Yes, this means both that the arresting officer cannot confiscate your license and that the issuing state will be notified of the arrest if a member of the Interstate Drivers’ License Compact.

Will A DUI Affect My Driving Privileges In My Home State?

If your state is a party to the Interstate Drivers’ License Compact, the California DMV will inform the DMV in your state of the arrest, and in the event of conviction, your home state will impose its own DMV penalties within that state.

California is one of 45 states that shares information with other states regarding serious driving offenses such as an arrest and conviction for a DUI.

Do I Need To Come Back To California For Court?

In most misdemeanor DUI cases, you may waive appearance and have your attorney appear in court on your behalf.

This is an important benefit for out of state drivers who are unable to remain in the state throughout the proceedings.

Do I Need To Appear In Court For A Felony DUI?

Generally, for a felony the person charged must be in attendance at all hearings but depending on your previous record, your lawyer may be able to negotiate a waiver with the court regarding your absence.

What Are The Penalties For A California DUI For Out Of State Drivers?

Even though you are an out of state driver, a DUI conviction in California can carry with it serious repercussions including:

The severity of the consequences and the complexity of dealing with criminal matters across state lines make it imperative to contact a California DUI lawyer for support.

For specific penalties see our guides below for more information on how this will impact you as an out of state driver.

Should I Get a Different Attorney In My Home State?

It is not necessary to get a separate lawyer to defend you in your home state if your arrest was in California.

In this post, I will explain California Vehicle Code 23152(a) VC which makes it a crime for a person who is under the influence of any alcoholic beverage to drive a vehicle1. Let’s get started… But first, watch this short video to understand how you can be charged with a DUI even if your BAC…

California, allows misdemeanor DUI’s to be expunged from your criminal record as well as some felonies as long as you complete certain requirements1. What Are The Benefits Of Expunging A DUI Conviction? Besides having your DUI conviction sealed from public view, you have the right to deny under oath and without penalty of perjury that you were…

The SCRAM bracelet or an alcohol monitor is an ankle bracelet that is worn by a DUI offender 24 hours a day, 7 days a week and tests sweat for the wearer’s blood alcohol concentration. Below our DUI attorneys explain when a scram bracelet may be worn as a penalty for a DUI and how much they cost. What Is…