Bail refers to funds deposited by a defendant or third person that is designed to ensure that the accused will make all future court appearances. It can be in cash or in the form of a bond secured from a bail bondsman.

Bail is not imposed on every criminal offense, however, and it largely depends on the nature and severity of the offense.

The amount of bail may be a set amount that may be lowered or increased by a judge depending on the circumstances of the offense and the character of the defendant.

Note: On October 1, 2019 the bail system in California is scheduled to dramatically change with the passage of Senate Bill 10. The bill provides for the elimination of cash bail and for it to be replaced by a system of judicial discretion for felonies while no misdemeanors will require bail.

How Is Bail Set?

Each California county has a local bail schedule1 for certain types of offenses.

Once you are arrested, a loved one can review the bail schedule, or ask a bail bondsman to do so, to determine the amount.

If the offense is one that is relatively minor, such as a DUI with no accident injuries or substantial property damage, then the jail will generally release the person after booking with no bail.

If your offense is on the bail schedule, then the jail will require that that amount be paid or a bond posted. An arresting officer can request that bail be set an amount that is more than the bail schedule indicates. At the arraignment, which is your first court appearance after your arrest, the judge will either continue the bail or modify it at an amount deemed consistent with the circumstances of the case. Your defense attorney can request a hearing on your bail within 2 days after your arraignment to challenge it.

At the bail hearing, the court can leave the bail amount as is, increase it, decrease it or release you OR or on your own recognizance.

What Does The Court Consider If I Request A Lower Bail Amount?

If you are seeking to reduce your bail amount or the prosecution wants to increase it, there are a number of factors the court will consider:

If you are charged with a serious offense such as:

Then the court may not modify bail without first finding unusual circumstances as justification6.

Can The Judge Deny Bail?

The court also has discretion to totally deny bail in your case. This may occur when another jurisdiction has an arrest warrant or a hold on you or you commit another crime while out on bail.

If you violated parole or violated probation, bail will not be set in most cases.

Can I Be Released Without Bail?

If your case is not serious, you have substantial community ties or the evidence is tenuous, then the court can release you OR.

You may not be released if the court is persuaded or feels that you do pose a risk to public safety7 or you are a substantial flight risk and bail will not ensure that you will attend future court appearances8.

If bail is set at a reduced amount or you are released OR, the court can impose conditions. Your defense attorney can also suggest conditions if trying to convince a judge to set bail or to decrease it. .

There are routine conditions that may be placed on you in return for releasing you OR or for reducing your bail. Others may be more applicable to your case. Conditions may include:

The easiest way of posting bail is to pay the full cash amount.

The funds are returned to the defendant once the proceedings are over and the defendant has not forfeited the bail by failing to appear for a court date or by violating a condition of bail.

Paying the full bail amount may also be done by producing a certified or cashier’s check, money order or traveler’s checks. A court clerk or the arresting agency may accept a personal check in some cases.

Can The Court Refuse To Take Cash Bail?

There are circumstances where a court will not accept bail if the origin of the funds is suspect such as emanating from a criminal enterprise, especially if a large amount of cash is deposited.

If you are charged with embezzlement of a substantial amount or with drug trafficking for example and you or a friend posts cash bail of $100,000 or more, the court may be suspicious of the fund’s origin.

You have the burden of proving that the source of the funds is legitimate. If not, the court can refuse to accept the cash.

The most prevalent method of posting bail is by obtaining a bond through a licensed bail bondsman since bail can be in the tens of thousands of dollars or more. You pay the bondsman up to 10% of the bail amount so that if a defendant has bail set at $50,000, you can buy or secure a bond for $5000.

After paying the bond amount, the bondsman will deliver it to the court to secure the defendant’s release. The premium paid to the bondsman is non-refundable.

Should you fail to make a court appearance and the court forfeits your bail, the bond company may seek to sell your collateral.

Most bail is posted by someone other than the defendant. You can co-sign for a bond with the bond company but you do have certain obligations if you do so.

Should the defendant flee the jurisdiction or simply not appear at the next date, the bond company will first attempt to find the defendant.

If the person cannot be located, the bond company will look to you for payment.

Failing to Appear After Bailing Out

Failing to appear in court can be a serious offense. 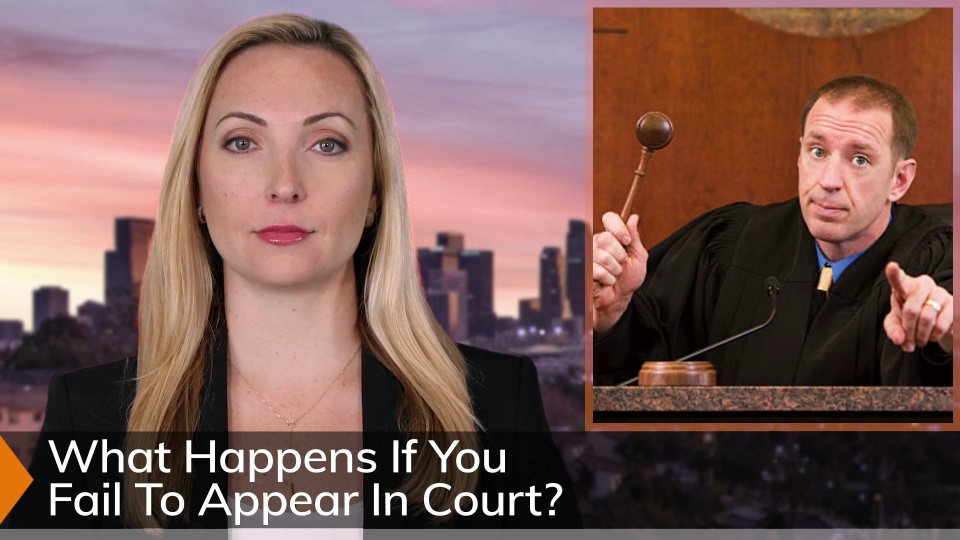 If your underlying charge was a felony, you risk being charged with another felony for your failure to appear.

In both cases, the court will issue a bench warrant for your arrest. This is true whether you were required to post bail or not.

Do You Lose Your Bail If You Fail To Appear In Court?

Bounty hunters are paid a percentage of the bond but only if the defendant is apprehended. They have authority to arrest the individual and return him or her to the authorities in the jurisdiction from which the defendant fled. There is a time limit to return the defendant or the bond company must pay the entire amount secured by the bond.

A court, however, can vacate its order for forfeiture and exonerate the bond if the defendant appears within 180 days of the bail forfeiture date and there is a valid excuse.

Failing to appear has serious criminal and financial consequences.

It can carry over as well in subsequent court cases after the current one is concluded and you are arrested again by providing an excuse for the court to deny or to increase your bail.

In this post, I will explain how electronic home monitoring or supervised electronic confinement (SEC) works and who can receive it. Let’s get started… How Does Electronic Monitoring In California Work? The monitoring is set up with a unit that is installed in the home that coordinates with a phone line or commercial cellular network and…

When selecting a jury, the federal or state district pulls names from a variety of sources, including registered voters, unemployment beneficiaries, and people with driver’s licenses or state identification cards. This is known as a “jury pool” and varies in size on a case-by-case basis. The potential jurors are selected at random by a computer…

Learn About The Criminal Trial Process.

If you are charged with a felony offense in California, you are entitled to a preliminary hearing, which may also be referred to as a probable cause hearing. Although probable cause is routinely found at these hearings and defendants bound over for trial on the charges, they can offer a prepared defendant in certain cases…

In this post, I will explain how misdemeanors work in California. Let’s get started… A misdemeanor offense in California is characterized by how much potential time you could serve incarcerated and where you would spend it. What Is A Misdemeanor Misdemeanors are criminal offenses that are less serious than felonies, though many do involve violence…