Wet reckless is another name for the charge of reckless driving involving alcohol. Below our DUI attorneys explain how and when a wet reckless may become a reduced plea bargain in a DUI case. 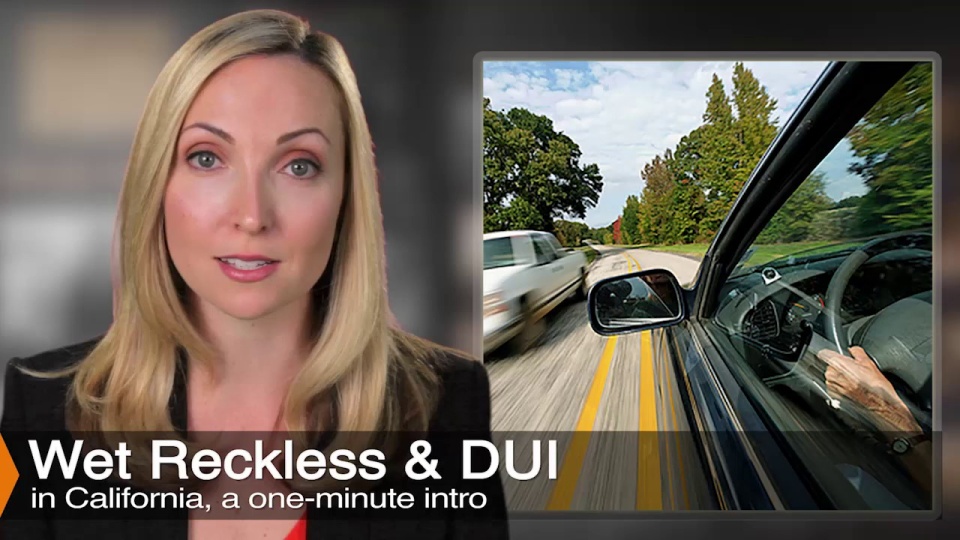 You Can’t Be Charged With A “Wet Reckless”

However, if you are a repeat offender and can get the prosecution to offer a wet reckless, you are the kind of person that would benefit most from this plea.

Related: 3 Stages of a Misdemeanor DUI

Compared to a DUI conviction, the penalties that go along with a wet reckless are much lighter.

However, you will still have to complete a court ordered driving under the influence program but there is no court-imposed suspension on your license. If you are arrested and convicted of another DUI within 10 years of the wet reckless, you will be treated as a repeat offender and the penalties will be applied according to the standards for a second offense DUI.

It is important to remember that a wet reckless is still considered a prior offense on your record if you are arrested for a DUI in the future.

What Are The Advantages & Disadvantages Of A Wet Reckless?

There are a number of advantages to pleading to a wet reckless rather than a DUI:

Advantages Of A Wet Reckless

What Are The Advantages To Pleading To A Wet Reckless Rather Than A DUI?

Disadvantages Of A Wet Reckless

There are other pleas that the prosecution can offer such as a:

A wet reckless is the most common type of plea that you will be offered. However, the previous pleas mentioned above are more advantageous than a wet reckless because they are not considered prior offenses.

Understanding the art of negotiating with prosecutors and reaching a favorable plea bargain requires experience within the California criminal law system. Therefore, it is imperative that you contact a California DUI attorney who is well-versed in these matters as soon as feasible. Your attorney will be able to analyze the particulars of your case, offer guidance on likely outcomes, and advocate for your interests with the State.

1) If The Court Doesn’t Suspend My License, Can The DMV Still Suspend It?

Yes. A wet reckless is still reported to the DMV and the DMV will treat it the same way they would a DUI.  The DMV is a separate administrative hearing and if you have a BAC of above 0.08% or lose your DMV hearing, they may still suspend your license for up to four months.

2) Do I Have To Get SR-22 Insurance If Convicted Of A Wet Reckless?

It is not the conviction of wet reckless that triggers the need for SR-22 insurance but rather a loss at a DMV Administrative Per Se hearing.  The DMV will require SR-22 in order to have your driving privilege reinstated.

3) When Is It Most Likely That A Prosecutor Will Offer A Plea Of A Wet Reckless?

The likelihood of you receiving an offer of a wet reckless depends on the individual circumstances of your case.  Some common examples of when a prosecutor offers the plea include (1) when your BAC is right at 0.08%, and (2) they would rather see a conviction than risk losing at trial.  If you have been convicted previously of a DUI the chances are smaller that the prosecution will offer this plea unless your defense is really strong.

4) Why Should I Plead To a Wet Reckless Charge If It Will Still Be Considered A Prior If I Am Convicted Of A DUI In The Future?

The wet reckless charge, which is an inducement to get drivers arrested for a DUI to plea out, has many advantages. A wet reckless looks much better on your record than a DUI and may help if you are trying to get employment or have employment where a DUI may disqualify you from certain certifications or clearances.  A Wet Reckless also has a shorter probation period than a DUI which is typically 3-5 years of probation.  Converesely a Wet Reckless typically has a 1-2 year probation period and you will qualify more quickly for a misdemeanor expungement under penal code 1203.4  Additionally no license suspension is triggered with a Wet Reckless plea.  A first time, second time DUI, and third time all trigger automatic license suspensions as well as chemical test refusals and driving under the influence under 21 years of age.

Can you get a wet reckless expunged?

Yes, you can have a wet reckless convicted expunged pursuant to Penal Code Section 1203.4. There are conditions under which an expungement may be granted including having completed all conditions of probation and having no pending criminal charges. Once expunged, you can state without fear of perjury that you have never been convicted of a DUI or wet reckless. Further, a criminal background check will not reveal the conviction.

However, your conviction still counts as a “priorable,” meaning that if you receive a subsequent DUI, the wet reckless conviction is counted as a prior conviction, leading to stricter penalties regarding jail time and increased time for license suspension among others.

How long does a wet reckless stay on your record?

A wet reckless is significant for 10-years. This means that if you receive a subsequent DUI or wet reckless conviction within 10-years of the original charge, the court will consider it as a subsequent and not a first offense.

What is the BAC limit in California?

You are not allowed to drive in California or any other state if your blood alcohol concentration or BAC level is 0.08% or higher. If you have a commercial driver’s license, the BAC level is 0.04%. For drivers under the age of 21, the BAC level is 0.02%, which is essentially zero tolerance. If your BAC is at or above these levels depending on your status, you are presumed to be under the influence of alcohol and your license is subject to suspension by the DMV.

Can I get a DUI reduced to a wet reckless?

It is not uncommon to get a DUI charge reduced to a wet reckless under California Vehicle Code Section 23103 and 23103.5. You are actually pleading guilty to “dry reckless” under VC 23103 but the section requires that the prosecution state a basis for the substitute charge and to state whether alcohol had been consumed or drugs ingested. This means that the conviction will be treated as alcohol-related.

A prosecutor may offer or agree to a wet reckless if your BAC result was 0.08% or slightly above and your driving conduct was relatively innocuous. Other factors may be your lack of prior convictions or any other criminal convictions and if there are problems with your case. This may include issues with your stop, detention or arrest, the validity of the breath or blood test or other evidence.

How many points is a wet reckless?

Like a DUI, you will receive 2 points on your license.

Is wet reckless a misdemeanor or a felony?

A wet reckless is a misdemeanor. This is especially significant if you have 3 prior DUI convictions since a fourth is a felony, or you were involved in an alcohol-related injury or fatal accident that is usually charged as a felony.

Can a wet reckless be an infraction?

Can you really get a DUI if you were not driving when the officer approached your vehicle? The short answer is……Yes The long answer is ……..Under Mercer v. Department of Motor Vehicles, the law demands proof of your volitional movement1 of a car before being convicted of a DUI. In this article, I will explain what happens…

In this post, I am going to show you exactly which mistakes police officers can make when instituting a DUI checkpoint. In fact: I have used these mistakes to file motions to suppress incriminating evidence or to file motions to dismiss charges. Let’s get started… Are DUI Checkpoints Legal in California? Yes, under state law, police departments are permitted to set…

In this post, I will explain exactly how you should handle a DUI stop by law enforcement in California. In fact, This is the same advice I give to family and friends when they ask me how they should handle this situation. Lets get started… DUI Stop Overview It can happen to anyone.  You’ve had…

A DUI breathalyzer test including at what point the test was taken and how many times the test was taken can influence the evidence gathered by prosecutors and ultimately the DUI case itself. Implied Consent California’s driving under the influence (DUI) law includes an implied consent law. This law holds that any person who drives…

In this post you are going to learn about the additional penalties associated with having a child in your car when you are arrested for DUI. You’ll also find out if you will be charged with child endangerment. Overview Driving under the influence is a serious misdemeanor and can be a felony under certain aggravating…