Have you been binge-watching “Making a Murderer” on Netflix or waited with bated breath to see how Adnan Syed’s appeal plays out in court in the “Serial” podcast? If so, you’re not alone – wrongful convictions (and the accusations thereof) are fast becoming a hot topic around the country. Increasingly, DNA evidence and organizations like the Innocence Project are working together to exonerate criminal convictions of innocent people, some of them decades old.

But what about the people that you’ve never heard of – the ones who spend five, 10, or even 40 years behind bars before finally winning their freedom? Using our interactive graphic, you can see their stories, and find data on the names, crimes, and locations of the 1,761 people (and counting) who have been wrongfully imprisoned in the U.S. for a combined total of 18,350 years.

Using data from the National Registry of Exonerations, we analyzed trends in overturned convictions. How do race, region, and other circumstances play in? The results offer a startling glimpse of the issue of wrongful imprisonment in the U.S.

Exonerated Prisoners in Each State

The interactive feature above shows the racial breakdown of all U.S. cases involving exonerated prisoners. Choose a state, crime, and/or contributing cause of conviction to see the percentages of each race for the selected criteria. 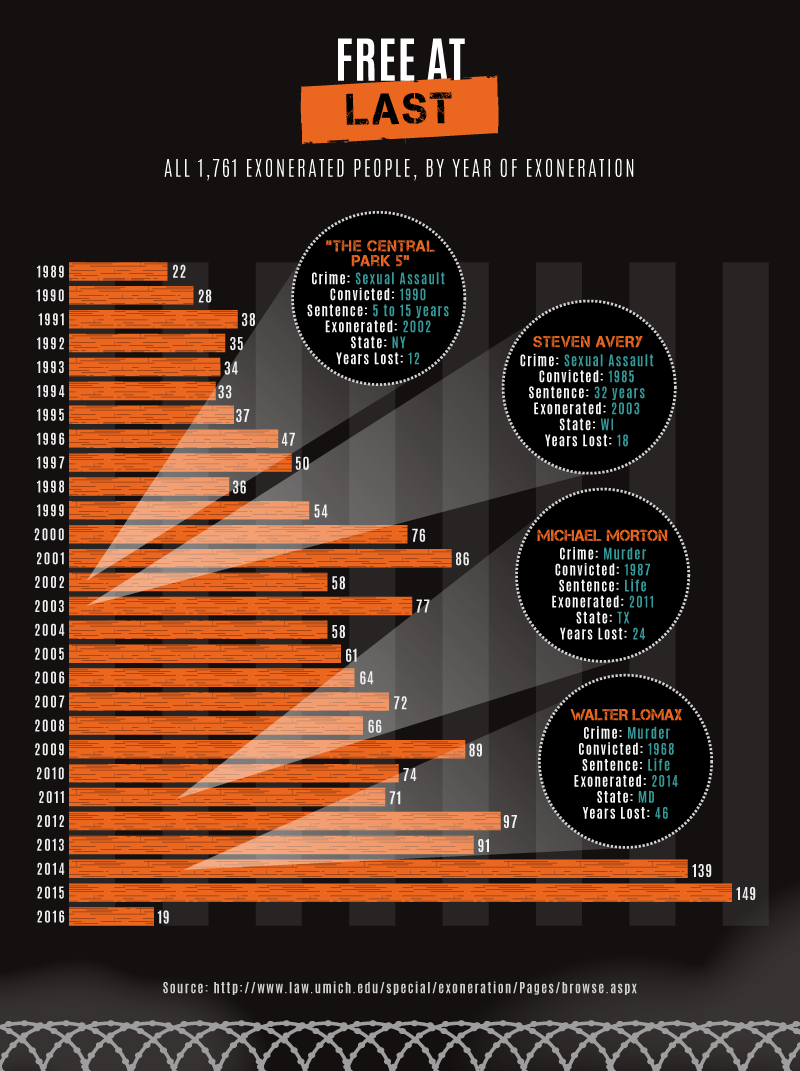 DNA testing began in 1985 and was first used in a criminal trial in 1987. DNA forensic investigations and implementation are largely responsible for the number of overturned wrongful convictions in America. The country had a record 149 exonerations in 2015.

But what are the names behind the numbers, and what are their stories? You may already know the name Steven Avery – the Wisconsin man and subject of the Netflix documentary series “Making a Murderer.” In 1985, Avery was convicted of sexual assault and served 18 years in prison before being cleared of those charges in 2003 due to DNA evidence. But just a few years after his release (and pending a lawsuit against the government for his wrongful conviction), Avery was convicted of murder and again put in prison. He has maintained his innocence in this case as well.

Another one of the 1,761 exonerations, Walter Lomax holds the unfortunate record of serving the most time before his exoneration. Lomax is a Baltimore man who was wrongfully convicted in 1968 of murdering a store manager. Several witnesses mistakenly picked him out of a lineup, despite the fact that he had recently sustained injuries and undergone surgery that would have made it nearly impossible to have committed the crime. His conviction was finally officially overturned in 2014 after he served 46 years of his sentence.

Written in Black and White 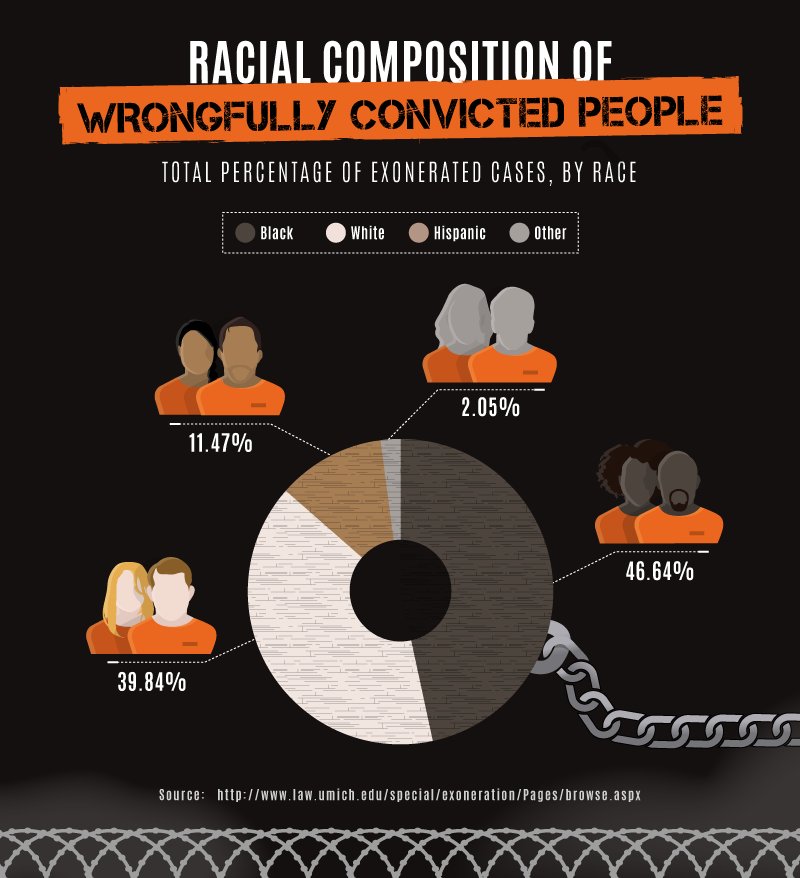 Breaking down the data by race reveals almost 47% of people wrongfully convicted are black, and another 40% are white. These figures are roughly in line with overall statistics on incarceration: Census reports show that about 40% of the incarcerated population are white, 40% are black, and 20% are Hispanic.

What’s troubling, however, is comparing these numbers with the overall population breakdown. In reality, 64% of people in the U.S. are white, and only 13% are black. This means that, per capita, black people are jailed at five times the rate of white people.

Wronged Because of Race? 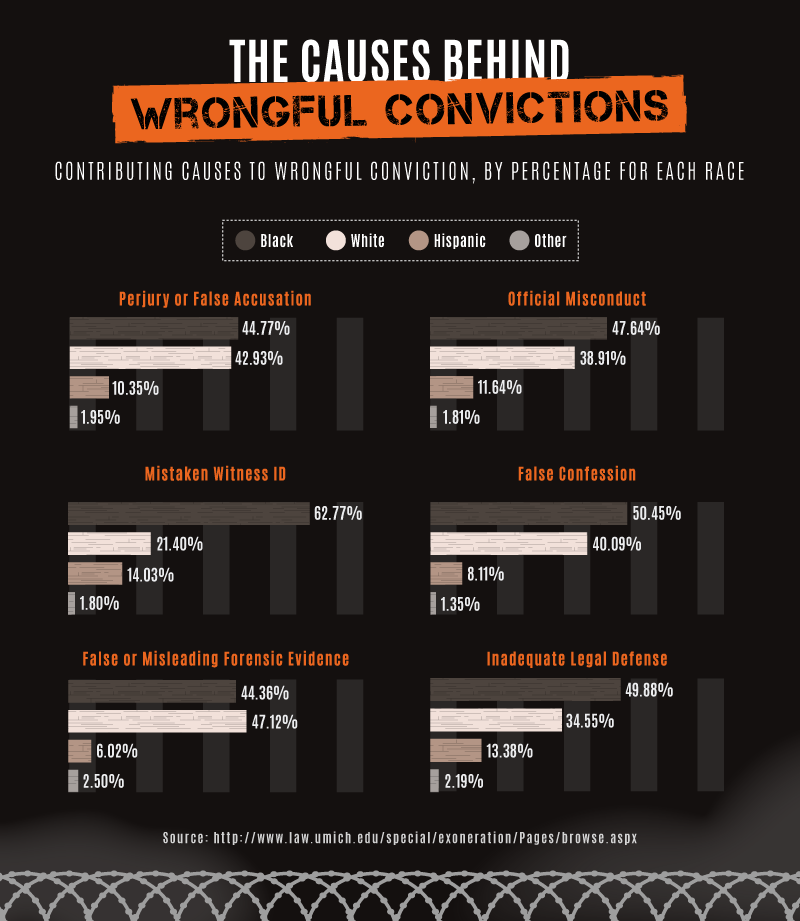 One of the biggest questions when considering wrongful convictions is how the innocent person came to be charged or convicted in the first place. What was the proverbial nail in the coffin? And though reasons differ for every case, some patterns begin to emerge when examining the data for all the cases together: Human error or deceit is almost always involved.

The No. 1 cause of wrongful conviction is perjury, which in and of itself is a crime. The second leading cause is misconduct on the part of the police, investigators, or other officials (as was suspected in “Making of a Murder” and “Serial”).

There are also some stark differences between the reasons for convictions of people of each race. Black people especially fall victim to cases of mistaken witness identification, as in the Walter Lomax trial. For a more recent example, consider the fact that pro tennis player James Blake was tackled by police in New York City because he resembled a thief they were looking for (although even that is contested).

But, as the data show, these are far from one-off circumstances. The increased incidence of mistaken identity among black people is possibly due to the fact that black people are stopped and questioned disproportionately by police. In fact, in 2011, more black males (168,126) were stopped in New York City than actually lived there.

There may also be less nefarious factors at play, such as the fact that studies have shown that people have greater difficulty distinguishing facial features across the races – so, to a white witness, many black or Asian people may look similar.

While we hear the most about overturned murder convictions, they only account for 40% of exonerations. Other crimes for which people have been wrongfully convicted include sexual assault and drug possession for sale charges. Examining the data from a racial perspective reveals that across 3 of the 4 categories, black people are the most frequently wrongfully convicted. This is most common in sexual battery cases, for which black people make up 60% of the exonerations.

Latinos represent a major portion of wrongful convictions for drug-related crimes. This supports reports detailing the practice of racially profiling Hispanic motorists and ethnic groups “associated with the drug trade.”

White people, on the other hand, comprise a whopping 64% of those cleared of child sex abuse charges. Researchers at the University of Michigan found that these crimes are usually fabricated rather than a mistake. For instance, a parent or police officer might persuade a child to testify that they were abused in order to get revenge on an ex-spouse or tie up loose ends in a case. 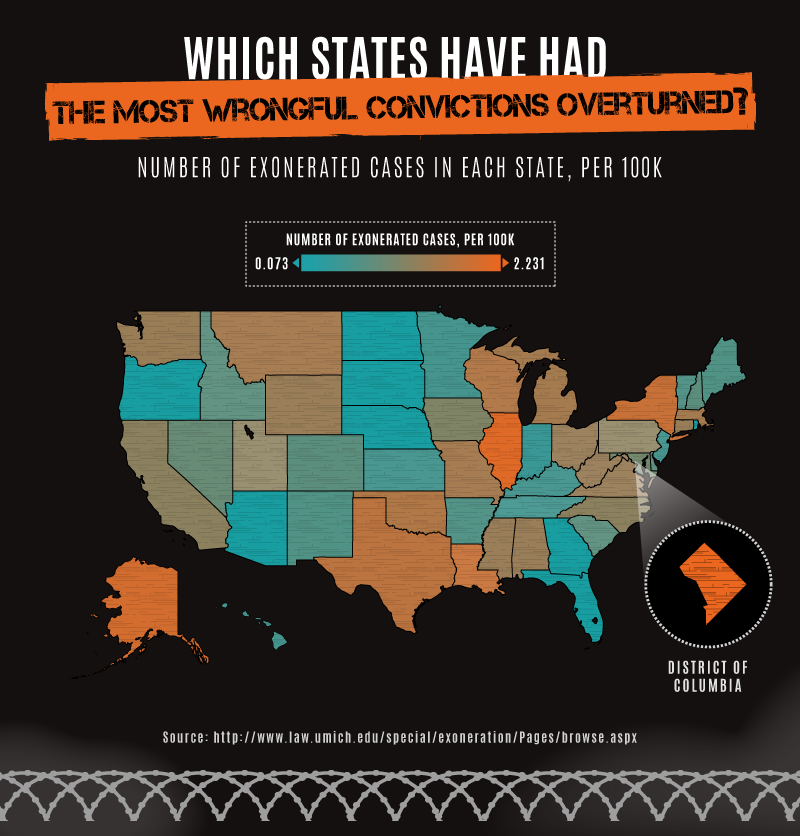 Mapping the wrongful conviction rate per capita provides a broad view of the vast differences among states. While certain trends emerge (for instance, a swath of Midwestern states experience a relatively low rate), you can see wide variations even among neighboring states. 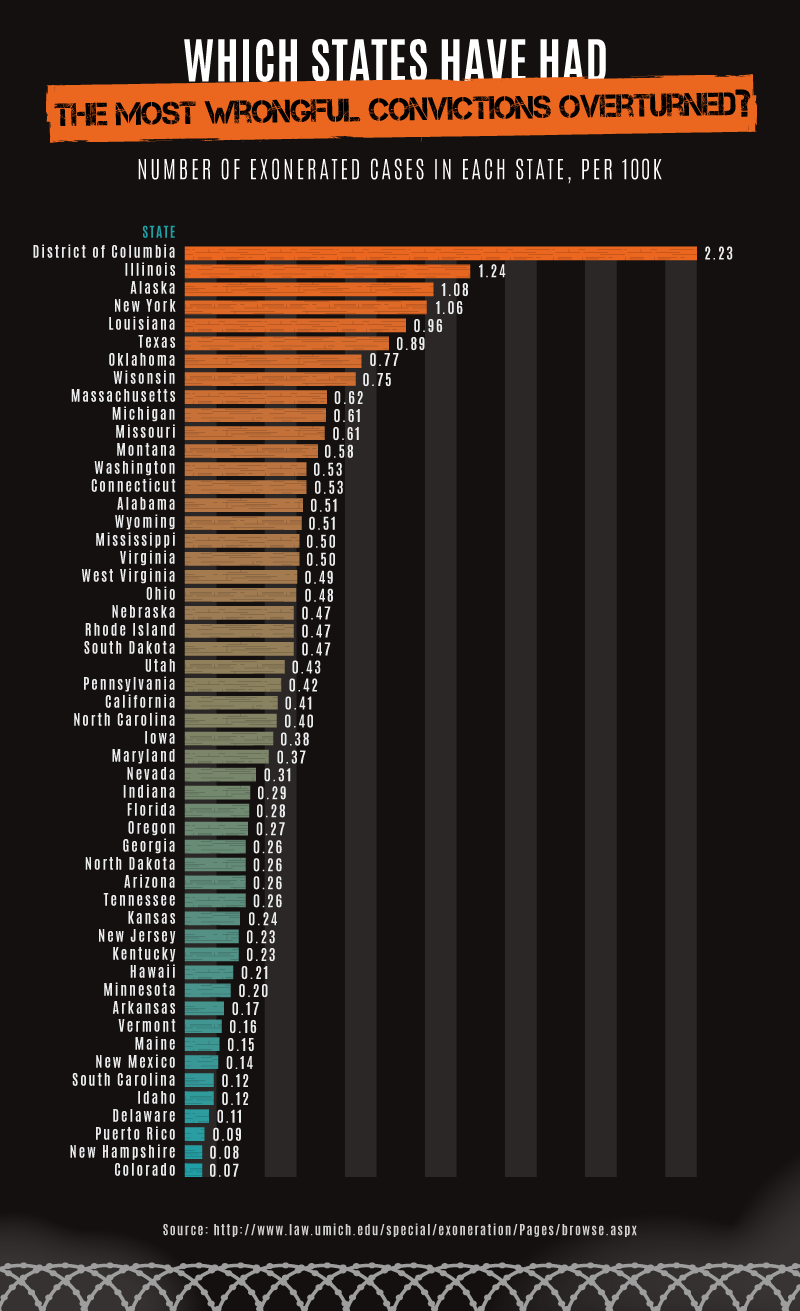 As mentioned above, Washington, D.C., overturns the most convictions per capita, with an exoneration rate of more than 1.5 times that of the next state on the list – Illinois. This may be partly due to the fact that the U.S. Attorney’s Office has recently set up a federal unit whose job is solely to examine wrongful convictions.

Illinois, which is second on the list, has also seen its fair share of exonerations: It contains the county that, as of 2012, had the highest wrongful conviction rate in the country. The state is also home to the wrongful conviction with the largest settlement on record – a $20 million payment after Juan Rivera was incarcerated for 19 years for a rape and murder he didn’t commit.

With 149 exonerations in 2015 and millions of people arrested every year in the United States, wrongful convictions may seem like a small piece of the imprisonment puzzle. However, some studies have estimated that as many of 5% of prisoners are convicted in error, which could mean that tens of thousands of innocent people are behind bars, many of them likely minorities who have been unfairly targeted.

However, America is seeing increased public awareness and strong efforts from organizations like the Innocence Project and the Innocence Network. We can hope factors like these will spark change when it comes to this all-too-common conundrum.

The list of exonerated inmates comes from the National Registry of Exonerations, a project of the University of Michigan Law School. We analyzed the race, region, and circumstances of each person’s wrongful conviction. Per capita state data were calculated using the 2015 U.S. census population numbers, for 100,000 state residents.

Feel free to share the images found on this page freely. This guide is provided by Aizman Law Firm